The book is about how to get the most out of social media. It covers basic concepts to keep in mind on any social network and has 5 chapters where each chapter is focused on a social network: Facebook, Twitter, Pinterest, Instagram, and Tumblr.

EdgeRank: this is the algorithm Facebook uses to measure every post that you or anyone makes. Every post has an ‘edge’ that is rated. The make up of the algorithm is not publicly known and supposedly Facebook is continually tweaking the algorithm, but we do know it measures engagement. Likes, comments, and shares are what you want from the posts you make. If you consistently get this engagement, Facebook makes sure more people see your posts in their feed. Going with Vaynerchuk’s boxing analogy, the right hook, when someone buys something from you, is not measured by EdgeRank. But the jabs, various conversational posts and engagements, are measured.

So what this means is that ads in the traditional sense that are written to motivate you to make a purchase are not as valuable on Facebook. But an example from the book of a boot company posting “So long, 30 Rock! Thanks for seven hilarious years!” is a valuable post because more people are likely to engage with it.

He explains how you get more reach on Facebook than any other current medium, and how marketing on Facebook is so much more cost effective than older choices like ads on televison.

Vaynerchuk addresses how the ads on the right side of the page on Facebook are becoming obsolete because of mobile and that instead we must learn to make posts that engage within the newsfeed.

Sponsored stories: you can pay to have a post ‘sponsored’ and Facebook is extremely helpful in making these effective. Facebook determines how much attention your post is likely to get and boosts it accordingly, and if it’s a post that is not likely to do well, Facebook backs off of it so you don’t waste money on a bad post.

This chapter concludes with a critique of almost 30 Facebook posts from major corporations such as Twix, Mercedes, Victoria’s Secret, and Subaru. There is a lot of great info in this section. Here is some of what I learned:

Vaynerchuk sums up the Facebook chapter with “Questions to Ask When Creating Facebook Micro-Content.” The questions are:

Overall this book is really helpful and am learning many things I did not know. If you are at all interested in more details of the summary I wrote, I highly recommend reading the book.

One way I wish the chapter was different is I wish the critique section were not so focused on major corporations. I wish there were more examples from small businesses or entrepreneurs. My favorite one was Cone Palace and I feel I learned the most from that one.

One unanswered question is when posting a link, sometimes it shows up as a thumbnail:

Whereas other times it shows up as a larger photo:

I don’t know why this is but all I can figure is it has to do with the orientation and dimensions of the photo, or it could be Facebook’s algorithm judging the post and giving a more prominent photo to a link that is more promising(?). That is just speculation.

I disagree with his advice on posting a logo in every photo. For a major corporation this might be good advice, but from a direct response marketing standpoint, this is not an ideal strategy.

Finally I will share I was discouraged when I visited Gary Vaynerchuk’s Facebook page to discover he has a lot of the links with just a thumbnail image. This made me question just how important is the advice he is giving? Or is this just something you should do on more important posts?

Still I highly recommend “Jab, Jab, Jab, Right Hook” and believe it is a necessary read to stay current.

If I can get these materials together then I will be prepared when January 2014 clicks over. The focus for January will be to “hit it hard” in making strong connections with restaurants that will lead to new jobs.

When I began to work on my business card, I modeled the framework of my design off of one of my favorite magician’s business card: Eugene Burger.

I told my graphic designer I want a card that is simple and elegant, black and white, with helvetica font. I told her to think about how Apple designs their products/marketing. I did not share Eugene’s card with the designer. I sent my headshot, the info to be printed on the card and waited to see what she came up with, after a few adjustments here it is.

When I got the new cards back from the printer nextdayflyers, there was a problem with the new headshot. 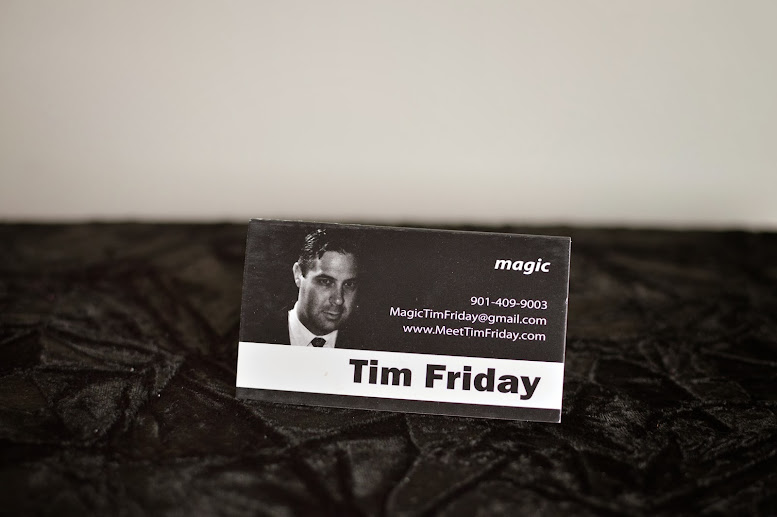 The image is very dark and grainy and I found this unacceptable. There are scouring marks that run horizontally across the card. I spoke to nextdayflyers and they agreed to do a reprint even though they said the problem came from the properties of the digital file.

I had my graphic designer adjust the photo and I sent it back to nextdayflyers. Here is the final product and the card I am using today.

It was very frustrating when I had the problem with the new card. You get your hopes up about receiving the shipment of new cards only to find it’s not good and then it drags out another month until you get your new cards. I’m glad I addressed the problem because I am happy with this card and pass many out each week.

How do you give a restaurant client excellent service? How does the level of hospitality effect a diner’s experience?

Since I am a close-up magician who performs at restaurants, these are questions I think about. I did some research on the subject and here some ideas I found interesting.

The book “Remarkable Service” by the Culinary Institute of America states the attributes of remarkable service.

Remarkable Service (here are a few of the attributes)

I choose to let these attributes be a guide for how I perform at the restaurant.

“Our customers, especially in fine dining, are not coming to us necessarily to get fed, they’re not even coming to get pampered or for the beautiful ambiance. There’s something more. They want a memorable experience. Creating great memories for our guests is what we do.”

“To entertain a guest is to be answerable for his happiness so long as he is beneath your roof.” Anthelme Brillat-Savarin, 1825

Close-up magic is a wonderful entertainment choice for restaurants because

The info in this post is from 8 Ideas To Raise The Service Bar  from the site Restaurant-Hospitality.com and the book “Remarkable Service.”

There was no response, so now I know to focus my time elsewhere instead of a Vine video social media campaign. Maybe the videos will get some attention in the future and will prove beneficial.

If you’ve been following me on twitter or facebook this week, you already saw some of these, but don’t miss the new bonus tricks…

The appearance of a chinese coin from a mysterious invisible coin purse.

A rubber band links on and off a lady’s finger ring. Both the ring and the rubber band are solid.

Two rubber bands melt through each other, linking. As you can see in the second video, both rubber bands are solid.

A string is threaded onto a ring and then solid through solid, the string is pulled through the ring.

A chinese coin rolls over the fingers, vanishes and reappears.

Performing magic is extremely meaningful to me and here’s why.

Magic gives me a way to do something nice and special for others. It’s a way for me to give you an experience you will remember for the rest of your life.

You see, most of my life I have been a very nice person. If you don’t know me very well it will surprise you to know there was a chapter in my life where I struggled with anger.

I’m not going to get into the details of this, but I am very grateful to the people who helped me mature out of that chapter in my life. I’m grateful that I learned and reached a new level of awareness.

It was during the process of healing from my emotional and spiritual dysfunction when I became reacquainted with magic.
Magic was my main hobby from about 9 to 13 years old. I was about 30 years old when I went to a magic show with my parents and some nephews and niece and was reminded of my childhood hobby and the spark was reignited.

It’s a way to proactively do something nice for others rather than reacting to others out of self-protective anger.

In this moment that is how I express to you why I love magic.

I am excited to share that I will now be performing close-up magic at Tin Roof, 1516 Demonbreun St, Nashville, TN on the 1st Thursday night every month from 11pm to 1am.

Tin Roof is the premier fun and casual bar in the Nashville area, and a great place for close-up magic.

While this new gig is major step forward, I still need 4 additional weekly restaurant gigs before I can even consider quitting my day job.

Close-up magic provides a restaurant with the benefits of bringing in more regulars, enhanced hospitality for customers, and additional publicity. These are just a few of the many benefits.

What restaurant in Nashville, Brentwood, Mt Juliet, or Franklin, TN would you like to see close-up magic as entertainment?

Here’s how I’m doing so far:

I intentionally only set 5 goals this month so I would be more productive. Last month I think I had 10 and I didn’t get much done. With only 5 I am able to maximize my focus. The toughest one this month was the TV appearance and that one is already done.

What it comes down to is am I going to get these done? Or am I going to rest on my laurels and be unproductive, unfulfilled, and unhappy. I could call it procrastination but the fact is I will either procrastinate on these or I choose to procrastinate something else that is less important.

Have Tim Perform Magic At Your Event

To learn more about having Tim entertain the guests at your event with his astonishing magic CLICK HERE!